sport’s powerful role in Australia cannot be denied; more than 5.6 million women, men and children play some kind of sport regularly. It is not just the players, but the coaches, sports administrators, family and friends who provide an essential network that allows those millions to play sport every week.

It is this enormous web – affixed to possibly every person in Australia – that is being tapped into in the hope of addressing the colossal and systematic problems of family violence, bullying, racism and violence across the country. 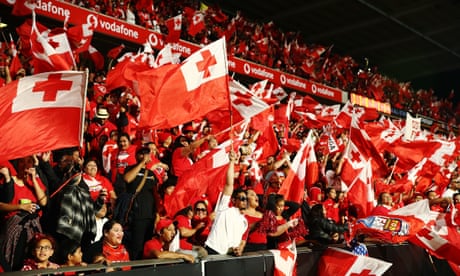 The Victorian Women’s Trust (VWT) has launched Club Respect, a comprehensive online program aimed at helping players and sports administrators change their behaviours and attitudes inside the club, and then take those improvements to their homes, schools and workplaces.

“There are many forms of violence and they often play out in the clubs – everything from white-anting, having a go at referees, yelling and physical fights – and in clubs, there is a strong opportunity to model good behaviour and good choices,” Zappa says.

Mary Crooks AO, executive director of VWT, adds that given sport’s elevated role in society, any positive changes about how members behave can have a ripple effect across their communities.

“If clubs can get it right, in the way that they create cultures of deep respect, fairness and equality, then inevitably the communities around those clubs will benefit, too.”

Sport and family violence are linked, not just through high-profile athletes such as Justin Murphy and Shannon Grant, but amongst their supporters, too; research has revealed that there is a 40% spike in family violence on State of Origin match days across New South Wales. And in Victoria, there is a 20% escalation on AFL grand final day.

Research from Lancaster University in the UK revealed that there was a jump in domestic violence when England won or drew in the 2002, 2006 and 2010 World Cups, but that rate skyrocketed to 38% when the team lost.

While professional clubs and leagues attract more media attention because of their high profiles, Zappa says it’s the community clubs where the biggest impacts can be made.

“Some of the bigger developments that have occurred over the past few years have happened at the elite level, which is welcomed, but sometimes those campaigns don’t filter down far enough,” he said.

Crook adds that in regional areas, this is especially important because sports clubs can be one of the few, and sometimes only focus, for communities, which increases the need for clubs to erase abusive and discriminatory behaviours.

However, professional sport does have a role to play, especially for providing strong role models to their young fans. Crooks points out that the appointments of Justin Langer as the Australian men’s cricket coach and Tim Paine as captain has ushered in a new emphasis on ethical conduct.

“I know Justin and myself are taking this very seriously. We want to build a culture that makes people want to be better and produce not only better cricketers but better people,” Paine said in September, adding that part of the new charter will include a “no asshole rule”.

Crook says the program is not about stopping things, but changing them and making them better.

“When ‘anything goes’ in sport, no matter at what level, it feeds into the idea that you can treat people badly and get away with it. Instead of wagging a finger, we’re saying that that sort of behaviour doesn’t get you anywhere.”

… we’re asking readers to make a new year contribution in support of The Guardian’s independent journalism. More people are reading our independent, investigative reporting than ever but advertising revenues across the media are falling fast. And unlike many news organisations, we haven’t put up a paywall – we want to keep our reporting as open as we can. So you can see why we need to ask for your help.

The Guardian is editorially independent, meaning we set our own agenda. Our journalism is free from commercial bias and not influenced by billionaire owners, politicians or shareholders. No one edits our editor. No one steers our opinion. This is important as it enables us to give a voice to those less heard, challenge the powerful and hold them to account. It’s what makes us different to so many others in the media, at a time when factual, honest reporting is critical.

Please make a new year contribution today to help us deliver the independent journalism the world needs for 2019 and beyond. Support The Guardian from as little as £1 – and it only takes a minute. Thank you.

It’s been more than 51 years since the Green Bay Packers met the Kansas City Chiefs at the Los Angeles Memorial Coliseum in the AFL-NFL World Championship Game, later to be known as Super Bowl I. Yet even today, the impacts of mega events are still almost exclusively measured in terms of economic impact.And while…

Participating in youth sports is a regular part of growing up, for most of us in North America. Physical activity is essential for healthy and optimal development, through childhood and early adulthood, and youth sports provide many opportunities for a physically active routine. Boosting the well-being of kids through this time can help your community’s future, as children…

Boosting participation in sport can generate a variety of socio-economic benefits. Sport can, and does, make a profound and positive impact on individuals, communities and wider society. Sport England commissions its own research on this topic, while keeping a critical eye on the latest evidence from around the world. The aim is to provide the…

Boosting participation in sport can generate a variety of socio-economic benefits. Sport can, and does, make a profound and positive impact on individuals, communities and wider society. Sport England commissions its own research on this topic, while keeping a critical eye on the latest evidence from around the world. The aim is to provide the…

Sports are an event that has been around in some form or another for many years. Through time, they have gradually evolved into their current state, and will undoubtedly continue to be around for years to come. This is because they always have, and always will be a positive influence on society and individuals. The…

Sports may not be all that good for children. Some people might say that sports can cause injury, children won’t get a chance to play if they are not very good, or children may be made fun of for lacking skill in that particular sport. I believe that participating in sports has a much more…